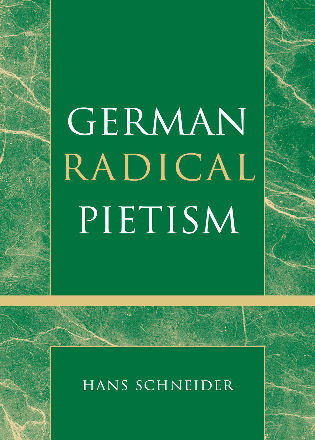 Pietism is increasingly recognized as the most important movement in Protestant Christianity since the Reformation of the sixteenth century. Simply put, early Protestant reformers were concerned with reforming the doctrine and beliefs of Christians whereas the Pietiest leaders were concerned with reforming the lives and behavior of Christians. This, coupled with other disagreements, led to calls for separation, which in turn gave rise to the movement best described as radical Pietism. German Radical Pietism introduces the English reader to the research of the major contemporary scholar of radical Pietism, Hans Schneider. Originally appearing in the comprehensive study of the history of Pietism that appeared in the 1990s, Schneider's research considers historical treatment of the major figures, movements, and ideas of the radical wing of German Pietism in the seventeenth and early eighteenth centuries. These developments are set in their historical and social contexts, thereby providing the first definitive treatment in English of this movement as a whole. Radical Pietism's seminal role in the emergence of modern religious communities_including Quakers, Brethren, and precursors of contemporary United Methodism, as well as a range of perfectionist communities in early American history_has only begun to be adequately assessed, and this study should be a critical resource in furthering that research. This work is one of the few studies available in English that addresses the important German historical work on Pietism from the late twentieth century. A definitive bibliography of recent research in radical Pietism is included to provide further reading on this important topic. «