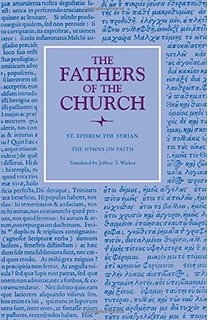 Hymns on Faith - Fathers of the Church (Hardcover) _130

Ephrem the Syrian was born in Nisibis (Nusaybin, Turkey) around 306 CE, and died in Edessa (Sanliurfa, Turkey) in 373.

He was a prolific author, composing over four hundred hymns, several metrical homilies, and at least two scriptural commentaries.

His extensive literary output warrants mention alongside other well-known fourth-century authors, such as Gregory of Nazianzus and Basil of Caesarea. Yet Ephrem wrote in neither Greek nor Latin, but in Syriac, a dialect of Aramaic.

His voice opens to the reader a fourth-century Christian world perched on the margins between the Roman and Persian Empires.

Ephrem is known for a theology that relies heavily on symbol and for a keen awareness of Jewish exegetical traditions. Yet he is also our earliest source for the reception of Nicaea among Syriac-speaking Christians.

It is in his eighty-seven Hymns on Faith - the longest extant piece of early Syriac literature - that he develops his arguments against subordinationist christologies most fully.

These hymns, most likely delivered orally and compiled after the author's death, were composed in Nisibis and Edessa between the 350s ans 373.

They reveal an author conversant with Christological debates further to the west, but responding in a uniquely Syriac idiom.

As such, they form an essential source for reconstructing the development of pro-Nicene thought in the eastern Mediterranean.

Yet, the Hymns on Faith offer far more than a simple Syriacpro-Nicene catechetical literature.

In these hymns Ephrem reflects upon the mystery of God and the limits of human knowledge. He demonstrates a sophisticated grasp of symbol and metaphor and their role in human understanding.

The Hymns on Faith are translated here for the first time in English on the basis of Edmund Beck's critical edition. [Språk: Engelska] Inbunden