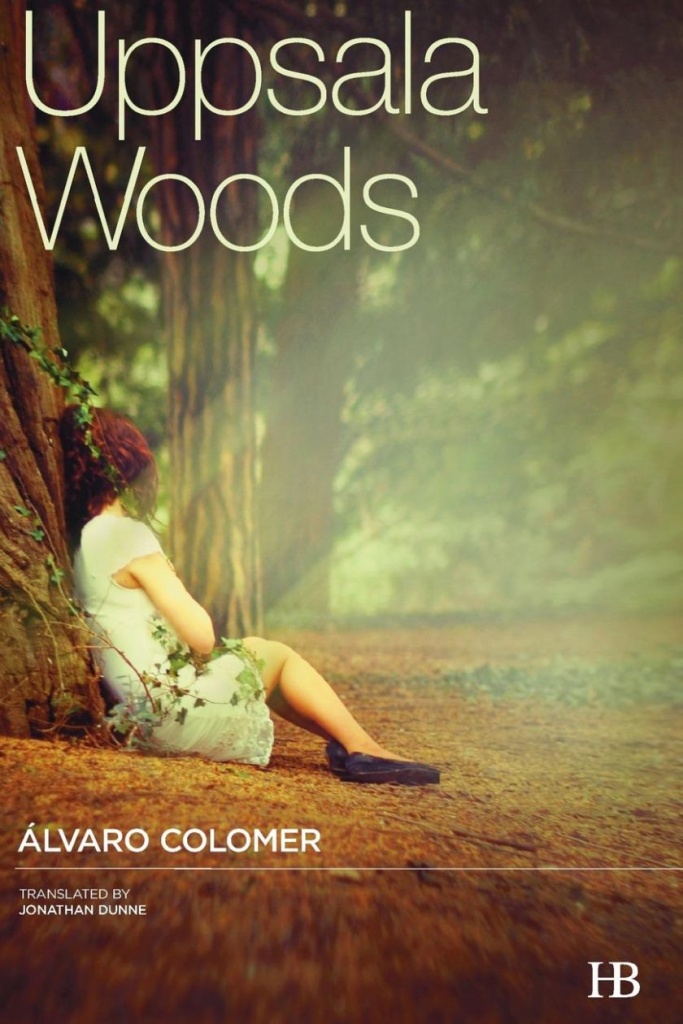 "In this grim but witty novel, the third in his trilogy about death in the city, Spanish writer Álvaro Colomer summons the words of two great writers by way of a shared epigraph: “I do not think about death at all, but death thinks constantly about me,” wrote the laconic Austrian Thomas Bernhard, while Colomer also quotes from the Hungarian 2002 Nobel Literature Laureate and death camp survivor Imre Kertész’s wonderful novel Liquidation (2003; 2006). Colomer is in good company: these three writers each describe the horrific comedy that lurks beneath tragedy. It is all so desperately funny because it is human.

Even more inspired is the source of the novel’s title. It is apparently named after a wood or forest in Viking Europe in which the elders, believing it their only route to the Great Banquet of the afterlife, having not died in battle, was to take their own lives: “These men would enter the thicket, tie ropes to the branches and allow themselves to fall with the pride of someone who does not falter . . . The chronicles say that no one ever removed their bodies, and the hundreds of corpses there, all dangling a couple of inches above the ground, formed the most desolate – and poetic – landscape imaginable in the universe of suicide.”

Julio, the narrator, resides in a controlled state of panic, with hints of paranoia and guilt. Who could blame him? Life is bad, his life or rather his specific personal situation is fraught because of his wife’s depression.

He also detests their neighbour, a smelly old widow, who enjoys a fond friendship with Elena, Julio’s wife, but clearly despises Julio no matter how many chores he has done for her.

The neighbour rarely acknowledges him: “She belittles me by asking who I am . . . I have helped her on hundreds of occasions . . . Needless to say, at precisely the moment I turn on my heels, the evil witch finally recognizes me and calls out my name . . .” and then shows off her superior apartment – it boasts an impressive entrance hall which Julio covets.

It is this level of detail that not only defines the personality of the edgy narrator – it makes this sharp, urgent novel soar. It may make you cry, but probably not as much as you will laugh.

Because Julio is a scientist, an entomologist, he prefers to offer an exact reason for the current state of his marriage and initially blames it on the apartment he rented; the floor plan is in the shape of a cross. A cross equals suffering, he decides, and he blames himself. His sense of guilt plays a major role in the narrative. “Every evening as soon as I return from work, I survey the corridor and recall the afternoon about a year ago when my wife informed me she had had enough of living in a place so linked to death as this.” He is like that, a natural pragmatist, albeit one inhabiting the edges of hysteria himself.

The book is very funny, even when it shouldn’t be. The apartment has a balcony. It seems to beckon but that may be due to Julio having witnessed, as a young boy, the despairing leap taken by a woman. He has vivid memories of that day; the scene haunts him.

Julio is tough and has a sharp tongue, but he is damaged. He tends to brood and recalls being at a surprise birthday party. Being Julio – who blurts first and then analyses – he remarks on never having had such a celebration, only to realise this may have upset his wife who is so depressed and has lost her job. But by the time that happened she had already become an obsessive, endlessly cleaning and tidying. She doesn’t even trust him to hang up his coat correctly. He fears “she will end up tidying the pigeon-holes in a madhouse”.

The story is complex but simple, a man is watching his wife heading towards madness or death or both. And he may not be far behind. In Julio, Colomer has created an engaging narrator and the bewildered clarity of his voice is plausibly deadpan, while the blighted logic is precise, if unsettling. Julio is sarcastic and given to snapping, yet sympathetic because he is real. Whatever about what is happening, it is the way in which Julio attempts to make sense of it all that engages us. Jonathan Dunne, who has to date achieved six superb translations of the work of the masterful Galician writer Manuel Rivas, again demonstrates an uncanny feel for nuance and the speech of characters often in extreme states of exasperation. Dunne makes Julio sound as if he is in the room, trying to explain it all. His translation conveys Colomer’s meticulously engineered mood shifts.

On arriving home one evening, aware it is their fifth wedding anniversary, Julio can’t find his wife and suspects, post-surprise birthday party, she could be hiding. It could be his turn to be surprised. And he is, but not quite in the way he expected, more what he most dreaded. Later as he sits waiting, Julio thinks and reasons – because that is what he does: “I’d imagined that the emergency section of a psychiatric hospital would be full of loonies swinging to and fro, dribbling on their clothes or holding forth with invisible entities, but I only have to look around to understand I’m in a building with people so medicated, so perfectly medicated, they do not even look mentally ill. This worries me even more . . . when it occurs to me that the lunatics of this century appear sane and every morning, when I leave the house to go to work, I walk aside a bunch of nutcases who, although they give the impression of being serene, could at any moment adopt a different attitude . . . I can not help wondering how many people I know are taking medication secretly because they fear to admit openly that life, the fast track life we all lead, has become unbearable.”

Julio has more than mental health on his mind, there is also the matter of his research and his conviction that he has discovered the country’s first colony of tiger mosquitoes. His excitement is blunted when the response to his news is half-hearted: “The what of what?”

As ever, Julio is prepared to take the blame: “Only then do I understand that I haven’t discovered penicillin, or nuclear energy, or even a vaccine against cancer, but a mosquito, a tiny mosquito, one could even say a ridiculous mosquito. I’m not going to allow myself to be overwhelmed by a sense of insecurity.”

It is at this point that he realises he has been discussing his find with the janitor who answered the scientific institute phone.

Julio’s meeting in a bar with his hapless brother-in-law, himself a mess, who makes a plea so touching on behalf of Elena, his sister, Julio’s wife, that even the bar staff and customers become involved, is a superb, stand-alone comic set piece. Elsewhere Julio calmly purchases timber and boards up the various doorways – and potential escape routes – back at home, to secure his wife while he is away, he believes.

There is a deranged lucidity about it all because at heart it is a profound and weirdly touching novel about love as much as depression and suicide. It will make you laugh out aloud and then weep silently before thinking long and hard. Colomer is a truth teller and his art is deliberate. Here is another Spanish novel to applaud." (Eileen Battersby i Irish Times)