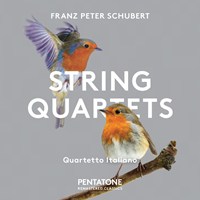 The twentieth century has heard great string quartets, such as the Busch Quartet, the Budapest String Quartet, the Amadeus Quartet, the Borodin Quartet and the Guarneri Quartet. The Quartetto Italiano certainly belongs to this top echelon of ensembles. The musicians met and first played together in 1942 and the quartet was founded in 1945. The musical development of the group was greatly influenced by German conductor Wilhelm Furtwängler, whom they met at the Salzburg Festival in 1951. They reached the pinnacle of their careers in the late 1960s and the 1970s and by the time they stopped playing in 1980, they had recorded the complete quartets by Beethoven, Mozart, Brahms, Schumann and Webern, amongst many others.

Despite his short life (Schubert died at the age of 31), his very harsh self-criticism and the fact that he had to measure himself against Beethoven, the composer who was considered an institution in early 19th century Vienna, Schubert, next to his numerous songs and his symphonic repertoire, is known to have written 20 string quartets. Fourteen of them were completed and can easily be divided into early, middle and late period quartets.

Quartet No. 10 D87, which comes from his middle period as well as his String Quartet No. 13 D804, also referred to as Rosamunde from the late period, a great masterpiece and one of the most outstanding quartets of the entire string quartet repertoire.