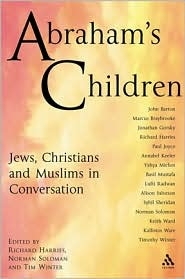 The world today is only too painfully aware of the tension, suspicion and at times outright hostility that exist among followers of the three great monotheistic religions of Judaism, Christianity and Islam.

In Abraham's Children distinguished scholars from all three faiths examine the key issues which either unite or divide Jews, Christians and Muslims today and offer constructive suggestions for developing mutual understanding, trust and co-operation.

The book is divided into two parts.

Part One, Foundations of Faith, explores the significance of Abraham, Moses, Jesus and Muhammad.

Part Two, Resources for the Modern World, deals with such diverse topics as the image of God in humanity, religion and pluralism, gender, the environment and life after death.

Each section is followed by a chapter identifying areas of common ground, as well as continuing differences and questions needing further exploration.

The Oxford Abrahamic Group has been meeting for more than ten years.

This exploration is the product of the fruitful interaction of its members, all of whom are highly conscious that monotheism itself is under question in the modern world.

Its contributors demonstrate that faith cannot be shared more widely without an acute awareness of the questions the world poses. [Språk: Engelska] Häftad