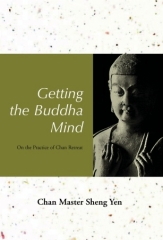 Getting the Budda Mind: On the Practice of Chan retreat

Chan - or in Japanese, Zen - involves studying, practicing, acting, and being, but beyond words and ideas, the true Chan cannot be described, only learned.

Under the guidance of authentic teachers like Chan Master Sheng Yen, many students in the West have learned how to follow the path.

Collected from a series of talks given during Chan retreats, Getting the Buddha Mind presents the teachings of this esteemed spiritual guide and brings the intimacy of the retreat experience into the reader's living room.

He holds a doctorate in Buddhist literature from Rissho University in Japan.

He is the author of over one hundred texts on Buddhism, and his books have been translated into eight languages.

He has been lecturing and directing retreats for more than twenty-five years in Asia, North America, and Europe. [Språk: Engelska] Häftad