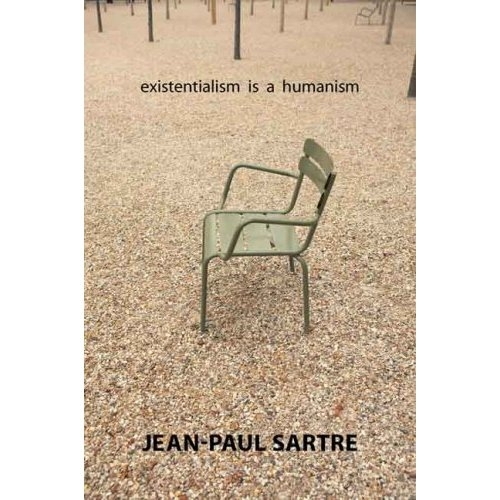 It was to correct common misconceptions about his thought that Sartre accepted an invitation to speak on October 29, 1945, at the Club Maintenant in Paris.

The unstated objective of his lecture (»Existentialism Is a Humanism») was to expound his philosophy as a form of »existentialism,» a term much bandied about at the time.

Sartre asserted that existentialism was essentially a doctrine for philosophers, though, ironically, he was about to make it accessible to a general audience.

The published text of his lecture quickly became one of the bibles of existentialism and made Sartre an international celebrity.

The idea of freedom occupies the center of Sartre's doctrine.

Man, born into an empty, godless universe, is nothing to begin with. He creates his essence - his self, his being - through the choices he freely makes (»existence precedes essence»).

Were it not for the contingency of his death, he would never end.

Choosing to be this or that is to affirm the value of what we choose.

In choosing, therefore, we commit not only ourselves but all of mankind.

This edition of Existentialism Is a Humanism is a translation of the 1996 French edition, which includes Arlette Elkaïm-Sartre's introduction and a Q&A with Sartre about his lecture.

Paired with »Existentialism Is a Humanism» is another seminal Sartre text, his commentary on Camus's The Stranger.

In her foreword, intended for an American audience, acclaimed Sartre biographer Annie Cohen-Solal offers an assessment of both works. [Språk: Engelska] Häftad