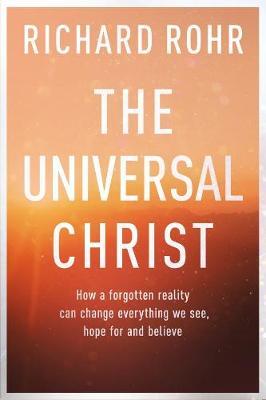 The The Universal Christ: How a Forgotten Reality Can Change Everything We See, Hope For, and Believe

In this brilliantly provocative, wise and enthralling book, Richard Rohr urges us towards greater understanding of the Cosmic Christ - 'the eternal union of matter and Spirit from the beginning of time' Across the 30,000 or so varieties of Christianity, believers universally love Jesus. They have no trouble accepting his humanity and his divinity. Many express intimations of his close presence in their lives; a fear of his judgment and wrath as well as a love of his compassion; a justification for their worldviews and politics (of all persuasions), and firm convictions about his atonement for their sins and thus his centrality in their personal salvation. But who is Christ? Is Christ simply Jesus's last name, denoting his role as saviour of humanity, as messiah? What is Christ? How is his function or role different from Jesus's? Are we missing something fundamental because of our overwhelming emphasis on Jesus to the exclusion of the Christ, or our misunderstanding of what it means that Jesus was `the Christ'? Could it be that such limited views are contributing to the slow and painful erosion of Christianity in western culture, to its insularity and insistence on purity and exclusion? These are questions Fr Richard Rohr has been pondering for many years. In his ecumenical and scripturally grounded books on contemplation, mysticism and many more topics, he has emphasized the importance of a large framework for understanding the nature of 'what is' and what lasts, of unity and the ultimate reality of God's presence in all of creation-Christian and non-Christian, human and non-human. Could it be that Jesus, who is the Christ, is offering us a model and example on how to live inside `this Big Frame?' FR RICHARD ROHR is a Franciscan priest of the New Mexico Province. He founded the Center for Action and Contemplation in Albuquerque, New Mexico in 1986, where he presently serves as Founding Director. An internationally known speaker, he teaches on such themes as adult Christian spirituality, men's spirituality, and politics and spirituality, and has published many books, including The Divine Dance, Immortal Diamond and Falling Upward (SPCK,2016, 2013 and 2012 respectively). Paperback / softback