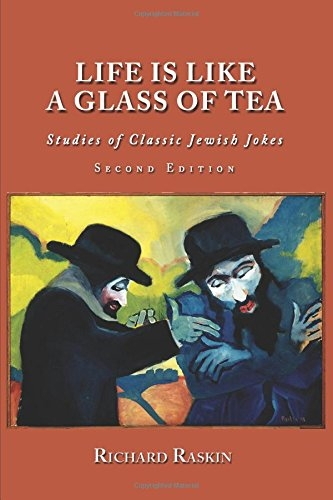 Life is Like a Glass of Tea: Studies of Classic Jewish Jokes (2ND ed.)

The first book on Jewish humor in which individual jokes are singled out for comprehensive study, Life is Like a Glass of Tea devotes a chapter to each of eight major jokes, tracing its history and variants - and looking closely at the ways in which the comic behavior enacted in the punchline can be interpreted.

One of the unique properties of classic Jewish jokes is their openness to radically different interpretive options (having nothing to do with wordplay or double entendre).

This openness to alternate interpretations - never before discussed in the literature on Jewish humor - gives classic Jewish jokes their special flavor, as they leave us wondering which of several possible attitudes we are expected to hold toward the comic figure.

An additional chapter is devoted to the ways in which Jewish jokes tend to evolve over time and across language and cultural barriers.

Throughout the book, in fact, one can see the processes that Jewish jokes undergo over decades as their comic potential is unfolded in successive stages, and when they are transplanted from European to American soil.

His imaginative response to this puzzle makes this little book a distinctive and engaging contribution to the literature on Jewish jokes and on jokes generally.”

It will appeal to the general reader, as well as to readers especially interested in Jewish culture, the psychology of humor, religion, ethnography, and folklore. [Språk: Engelska] Häftad