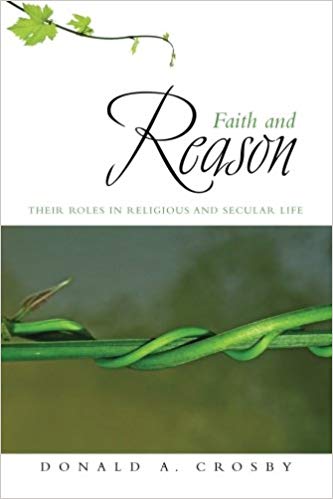 Faith and Reason: Their Roles in Religious and Secular Life

Explores the mutually dependent relationship of faith and reason in human life and human knowledge.

Few words are as widely misconceived as the word “faith.” Faith is often set in stark opposition to reason, considered antithetical to scientific thought, and heavily identified with religion. Donald A. Crosby’s revealing book provides a more complex picture, discussing faith and its connection to the whole of human life and human knowledge. Crosby writes about that existential faith that underlies, shapes, and supports a person’s life and its sense of purpose and direction. Such faith does not make a person religious and being secular does not mean one rejects all forms of faith. Throughout the book Crosby makes the case that faith is fundamentally involved in all processes of reasoning and that reason is an essential part of all dependable forms of faith.

Crosby elaborates the major components of faith and goes on to look at the mutually dependent relationships between faith and knowledge, faith and scientific knowledge, and faith and morality. The work’s final chapters examine crises of faith among several noted thinkers, as well as the author’s own journey of faith from plans for the ministry to pastor to secular philosopher and religious naturalist.

“This book is a perceptive and incisive articulation of the intellectual and moral challenges facing us today, and of the crippling assumptions that handicap us in meeting those challenges … Part of the power of Crosby’s project is its broad applicability to a wide range of philosophical, religious, and secular worldviews … Its language and concepts will be accessible to general readers and the profundity of its arguments will stimulate fertile discussions for the most sophisticated audiences.” — American Journal of Theology and Philosophy

Donald A. Crosby is Professor Emeritus of Philosophy at Colorado State University. His books include Living with Ambiguity: Religious Naturalism and the Menace of Evil; A Religion of Nature; and The Specter of the Absurd: Sources and Criticisms of Modern Nihilism, all published by SUNY Press.