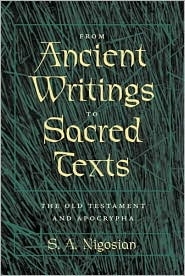 From Ancient Writings to Sacred Texts

The books constituting the Old Testament, or Hebrew Bible, have a complex history of authorship, resulting in a variety of styles, perspectives, and meanings.

The authors and editors of the books that became the Bible lived through the political vicissitudes of a region that was a cultural crossroads, subject to successive waves of invasion, settlement, and influence by a variety of civilizations.

Consequently, their works reflect the diverse political, intellectual, and literary legacies of the ancient Near East and, in some cases, the incorporation of non-Hebrew texts.

S. A. Nigosian, a scholar of Biblical and Near Eastern religions, explores the diverse literary antecedents of the Old Testament as well as the Apocrypha - books excluded from the canonical Hebrew text but included in the Septuagint.

Closely analyzing the formation and contents of these works, Nigosian compares them with the religious, philosophical, didactic, and historical works created by the neighboring Near Eastern civilizations of Egypt, Mesopotamia, Syria, Palestine, and Asia Minor. Proceeding book by book, he highlights parallels in language, structure, and story among Hebrew and non-Hebrew and non-canonical Hebrew texts.

From the ubiquity of flood myths throughout the ancient Near East to similarities between seduction tales in Genesis and Egyptian mythology, Job-like stories from Babylonian legend, and the recycling of elements within the Hebrew Bible, this book offers a concise and accessible history of the composition and compilation of the Bible and the complex process of canonization.

It also features a glossary, an extensive bibliography, and a chronology of the composition of theHebrew Bible and the Apocrypha. [Språk: Engelska] Häftad