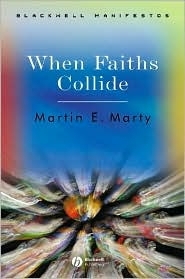 In the face of the growing threat from collisions of faith world-wide, this manifesto is a call to embrace religious pluralism.

# Martin E. Marty is a renowned commentator on religious matters, the author of over 50 books, winner of the National Book Award, and the recipient of 74 honorary doctorates

# Demonstrates that citizens, religions and identities can survive in radically pluralist settings

# Argues that those involved in collisions of faith need to risk hospitality towards one another, as opposed to the conventional plea for tolerance

# Pays particular attention to the conflicts that affect or occur within those nations whose politics can be called republican, open, democratic, liberal, or free - particularly the UK, the US, and Western Europe.

Martin E. Marty is Fairfax M. Cone Distinguished Service Professor Emeritus at the University of Chicago, where the Martin Marty Center has been founded to promote public religion endeavors.

Marty is a renowned commentator on religious matters.

He has written over 50 books, including the three-volume Modern American Religion (1986-96) and Righteous Empire: Protestantism in the US (Second Edition, 1986), which won the National Book Award, and has received 74 honorary doctorates. [Språk: Engelska] Häftad