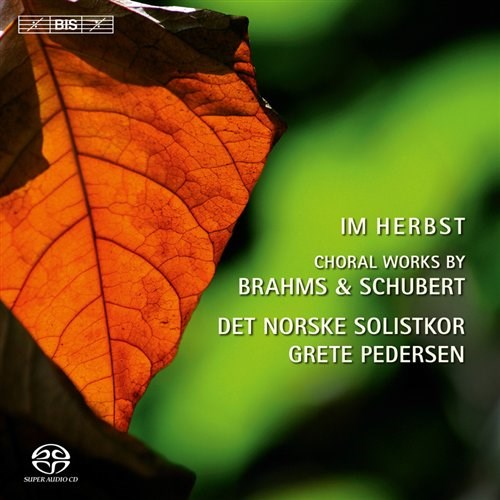 'Some of the most striking and moving singing put down on disc for years' is how White Night, the previous release with the Norwegian Soloists' Choir and its conductor Grete Pedersen, was described on the website of Gramophone. Having focused on music from their home country before, the team here presents a German programme, featuring two of the most influential composers in 19th-century choral music: Johannes Brahms and Franz Schubert. It includes both sacred and secular music, scored for male, female and mixed choir a cappella and accompanied, starting with a selection from Brahms' deservedly popular Zigeunerlieder for mixed choir and piano. A contrast to these settings of Hungarian folk songs is provided by the autumnal Five Songs for mixed choir a cappella - a collection of poems dealing with the transience of youth, love and life, which in many respects presents a masterful distillation of Brahms' choral output. From an earlier part of the composer's career come two sacred works for mixed choir, the motet Warum ist das Licht gegeben dem Mühseligen, showing Bach's influence on the composer, and Geistliches Lied, with organ accompaniment. Schubert is represented with a setting of Psalm 23 for women's choir and piano and Der Gesang der Geister über den Wassern to a poem by Goethe which Schubert chose to set several times. The version recorded here, numbered D714, is the last one. It has an unusual scoring for eight-part male choir and low strings which in 1821 perplexed the first audience, and which even today has a very special effect on the listener.