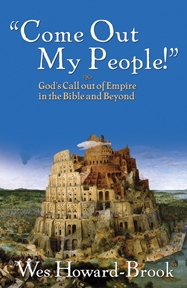 Come out, My People - God’s Call out of Empire in the Bible and Beyond

This landmark work provides a compelling vision of two religions—one of »creation» and the other of »empire» - running throughout the Hebrew and Christian scriptures and the profound implications this holds for believers today.

»Come Out, My People is undoubtedly one of the most important theological studies to be released in 2010. In recent memory, there have been other works that examine parts of scripture in light of the concept of empire (e.g., Brian Walsh and Sylvia Keesmaat's Colossians Remixed; Richard Horsley's Jesus and Empire and Paul and Empire), but none with which I am familiar has tackled the whole of the scriptural narrative with the depth and the clarity with which Howard-Brook has exhibited here.»--Englewood Review of Books

In this sweeping and transformative approach to biblical interpretation, Wes Howard-Brook presents the Bible as a struggle between two competing »religions»: not »Judaism» and »Christianity,» but the »religion of creation» versus the »religion of empire.»

Howard Brook demonstrates how, throughout the Hebrew scriptures, these two religions battled for the hearts and minds of the people in claiming radically divergent views of who YHWH is and what it looks like to be YHWH's people. In the New Testament, Jesus proclaimed and embodied one of these views—the »religion of creation»—and denounced the »religion of empire.» Though he was killed by the upholders of empire, his resurrection was the definitive vindication of the religion of creation. As a consequence, those who follow his path can accept no violence or domination toward people or creation in his name.

While many recent scholars have studied the imperial context of the New Testament, this is the first book to trace this theme throughout the entire Bible. As such, it sets a challenge for the future of biblical studies, while also defining a new framework for radical discipleship in our time. [Språk: Engelska] Häftad