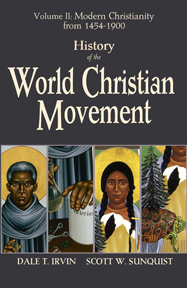 The first volume of this ground-breaking history traced the development of Christianity from its origins up to the midfifteenth century, and won immediate acclaim as a landmark in the unfolding understanding of World Christianity. In place of conventional Eurocentric treatments, this work assigned a rightful place to the peoples of Africa, Asia, and the Near East in the unfolding of Christianity, a religion constantly evolving in dialogue with new cultures, new questions, and new historical influences. Volume II continues the story up to the dawn of the twentieth Century. Beginning with the missionary expansion of the fifteenth century, the story goes on to trace the fracturing of the Christian movement among Catholic, Orthodox, and Protestant versions; the impact of modern colonialism and the emergence of a new global reality; the wars of religion, the impact of the Enlightenment, the rise of Christianity in North America, and the modern missionary movement. Throughout, the authors emphasize the expression of local forms of Christianity in diverse cultures, and the role of Christianity in helping to shape distinct national identities. They conclude with a forecast of a new century of globalization.

Dale T. Irvin is president of New York Theological Seminary and professor of World Christianity. He is the author of Christian Histories, Christian Traditioning (1998).