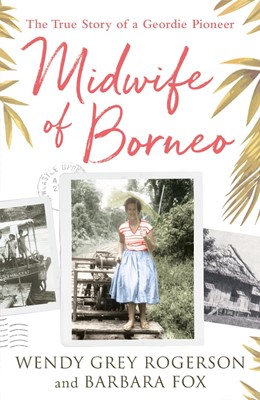 Midwife of Borneo The True Story of a Geordie Pioneer

Biography of a midwife missionary in Borneo. Call the Midwife' compellingly transposed from the East End of London to the Borneo jungle!Newcastle 1959. Wendy Grey, a young district nurse, responds to a call for aid from Christians in one of the remotest corners of the world. Officially, she is employed as a health worker running a dispensary as part of the Anglican mission in Tongud, North East Borneo. However, as the only medical practitioner in the region - apart from local witchdoctors - she is obliged to carry out every procedure her patients require, or watch people die.And so Wendy finds herself diagnosing diseases, performing operations (acting as both anaesthetist and surgeon) delivering babies and extracting teeth. When news reaches her of patients too sick to come to the dispensary, she undergoes long and arduous journeys, often travelling for hundreds of miles through the jungle in a dug-out canoe to reach them.Back home, supporters are uplifted by Wendy's selfless, cheerful ministry, horrified by her accounts of close encounters with snakes and crocodiles, and stirred by her courage in the face of hitherto unimaginable challenges.The young woman in Borneo is on the prayer list of every church in North East England. Wendy Grey Rogerson, a district nurse, undertook pioneering work in Borneo under the auspices of SPG (now USPG) in the late 1950s and early 1960s. Shortly after returning to Newcastle, she married and had a family. Wendy and her husband still live in North East England. Barbara Fox grew up in Newcastle then moved to London where she worked as a journalist for the Radio Times and the Telegraph newspapers. She is the author of Is the Vicar in, Pet? (Sphere, 2014), When the War Is Over (Sphere, 2016), co-author of Bedpans and Bobby Socks (Sphere, 2011 - featured on Woman's Hour), and editor of Eve's War by Evelyn Shillington (Sphere, 2017). Paperback / softback