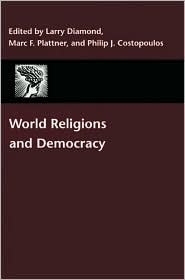 Can religion be compatible with liberal democracy?

World Religions and Democracy brings together insights from renowned scholars and world leaders in a provocative and timely discussion of religions' role in the success or failure of democracy.

An essay by Alfred Stepan outlines the concept of »twin tolerations» and differentiation, and creates a template that can be applied to all of the religion-democracy relationships observed and analyzed throughout the volume.

»Twin tolerations» means that there is a clear distinction and a mutual respect between political authorities and religious leaders and bodies.

When true differentiation is accomplished, the religious sector enjoys freedom of activity and the ability to peacefully influence its members but does not wield direct political power.

A country's ability to implement the principle of differentiation directly affects the successful development of democracy.

The third part addresses democracy in relationship to Judaism and the three branches of Christianity - Catholicism, Protestantism, and Eastern Orthodoxy. Sociologist Peter Berger offers a global perspective of Christianity and democracy.

The volume's final section discusses what is perhaps the most challenging example of the struggling relationship between religion and democracy today: Islam and the governments of the Muslim nations.

Abdou Filali-Ansary, Bernard Lewis, and others present a comprehensive exploration of Muslim thought and faith in an increasinglysecular, modern world.

It is in this volatile political and religious climate that solutions are most urgently needed but also most elusive.