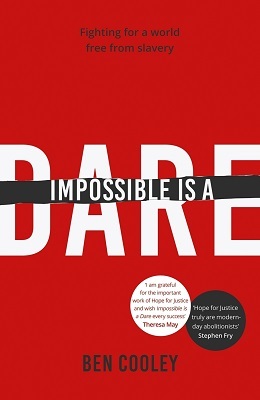 Impossible is a Dare

Impossible is a Dare tells the inspiring story of Ben Cooley, Hope for Justice and their fight to see the end of modern day slavery. Impossible is a Dare is also a challenge for readers to find their passion and turn it into action, and see the 'impossible' for what it really is; nothing but a dare. Ben Cooley was just 26 years old when he booked Birmingham's NEC Arena. He didn't have the first idea about putting on a major event. He didn't have a strategy, he didn't have the funds. But he did a have vision; a vision to live in a world free from slavery. This is a story of passion turned into action. In this book Ben shares the journey of Hope for Justice, from one man with a wobbly desk to an international organisation now rescuing victims in the UK, US, Cambodia and Norway. Featuring real-life rescues and the voices of Rend Collective's Patrick Thompson, Rob and Marion White, actor Tom Lister, Athena Pond and many others involved in the story so far, this book is about more than fighting slavery. Impossible is a Dare is a challenge. What are you passionate about? What would you like to build or break or change? This book will inspire all readers to find and fight for their own vision and see the impossible for what it really is; nothing but a dare. Manchester-based Ben Cooley is CEO of Hope for Justice, an organisation with a practical approach to ending slavery. Since HFJ was established in 2008, Ben has overseen its growth to six offices on three continents. HFJ - now consisting of Abolition International (Nashville, US), Transitions Global (Phnom Penh, Cambodia) and HFJ UK (Manchester, UK) - works in partnership with law enforcement and pioneering model anti-trafficking programmes in the UK, US, Cambodia and Norway. Ben is a gifted speaker and has previously toured with Rend Collective and Jesus Culture in the USA. He and his family live in the UK. Paperback / softback