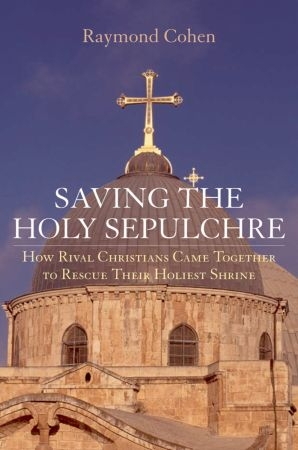 The Church of the Holy Sepulchre is the mother of all the churches, erected on the spot where Jesus Christ was crucified and rose from the dead and where every Christian was born.

In 1927, Jerusalem was struck by a powerful earthquake, and for decades this venerable structure stood perilously close to collapse.

In Saving the Holy Sepulchre , Raymond Cohen tells the engaging story of how three major Christian traditions - Greek Orthodox, Roman Catholic, and Armenian Orthodox - each with jealously guarded claims to the church, struggled to restore one of the great shrines of civilization.

For centuries the communities had lived together in an atmosphere of tension and mistrust based on differences of theology, language, and culture-differences so sharp that fistfights were not uncommon.

And the project of restoration became embroiled in interchurch disputes and great power politics.

Cohen shows how the repair of the dilapidated basilica was the result of unprecedented cooperation among the three churches.

It was tortuous at times - one French monk involved in the restoration exclaimed:

Latins - Armenians - Greeks - it is too much.

I am bent over double.»

But thanks to the dedicated efforts of a cast of kings, popes, patriarchs, governors, monks, and architects, the deadlock was eventually broken on the eve of Pope Paul VI's historic pilgrimage to the Holy Land in 1964.

Today, the Church of the Holy Sepulchre is in better shape than it has been for five hundred years.

Light and space have returned to its ancient halls, and its walls and pillars stand sound and true.

Saving the Holy Sepulchre is the riveting story of how Christians put aside centuries of division to make this dream a reality. [Språk: Svenska] Inbunden