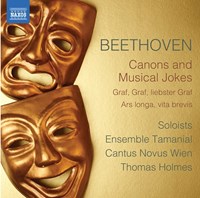 One of the least explored areas of Beethoven’s compositions is the miscellaneous sequence of canons, early exercises in counterpoint, mature jokes and jeux d’esprit that he wrote over many years. He composed a two-part canon for the composer Hummel in 1816 and in 1823 one for four voices (written in a tavern) for Count Lichnowsky. He also wrote birthday and Christmas greetings for colleagues and friends, and songs that punned on recipients’ names or poked fun at them. Viennese chamber choir Cantus Novus Wiendraws on an extensive repertoire of Baroque, Classical, and contemporary music, including a cappella choral music, oratorios by Handel and Haydn, and requiems by Mozart, Brahms, Verdi, and Fauré. Contemporary music is one of the choir’s focal points, including regular world premieres of commissioned pieces. The choir has been conducted by Thomas Holmes since 2001. Ensemble Tamanial is a vocal quartet based in Vienna, Austria. The ensemble was established to provide a place in which to grow and learn as musicians through undertaking soloist responsibility across a wide variety of musical styles, including Renaissance, Classical, Romantic and also in contemporary works. For these Beethoven recordings the ensemble have been working closely with Thomas Holmes as their musical director and wish to express their deep gratitude.