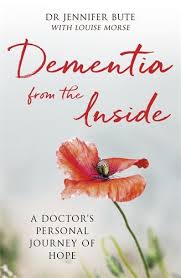 Dementia from the Inside A Doctor’s Personal Journey of Hope

A GP describes their experience of dementia. Jennifer Bute was a highly qualified senior doctor in a large clinical practice, whose patients included those with dementia. Then she began to notice symptoms in herself. She was finally given a diagnosis of Young Onset Dementia in 2009. After resigning as a GP, she resolved to explore what could be done to slow the progress of dementia. The aim of this practical book is to help people who are living with dementia and to give hope to those who are with them on the dementia journey. Jennifer believes that her dementia is an opportunity as well as a challenge. Her important insights are that the person `inside' remains and can be reached, even when masked by the condition, and that spirituality rises as cognition becomes limited. `The observant physician shines through in Dr Bute's book, while her practical advice reveals the resourcefulness of an inventor. Alzheimer's disease has surely met one of its toughest ever adversaries!' - Peter Garrard, Professor of Neurology, University of London As a senior doctor in the largest clinical practice in Southampton Dr Jennifer Bute helped diagnose and manage the care of patients with dementia. She was also a Fellow of the Royal College of General Practitioners, teaching medical students and doctors, before succumbing to dementia herself. She lives in sheltered accommodation but still handles her own correspondence. Paperback / softback