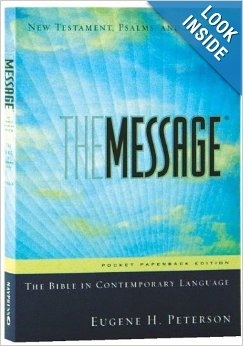 In this contemporary English version of the New Testament with Psalms and Proverbs, Eugene Peterson strives to convey the earthy truths of the original Greek and Hebrew texts. As he explains in his introduction, there were two levels of language in the Greek-speaking world, »formal» and »informal». The one was for use in official documents, epic poetry, and philosophy, the other for shopping lists and personal letters--the common idiom of everyday speech. »This is the language used throughout the New Testament ... a rough and earthy language that reveals God's presence and action where we least expect it, catching us when we are up to our elbows in the soiled ordinariness of our lives and God is the furthest thing from our minds.»

It is in the spirit of this »soiled ordinariness» that Eugene Peterson translates John 1:14 (NIV: »The Word became flesh and made his dwelling among us») to »The word became flesh and blood and moved into the neighborhood.» Likewise, in Romans 8:3 where the NIV renders »For what the law was powerless to do in that it was weakened by the sinful nature, God did by sending his own son in the likeness of sinful man to be a sin offering,» The Message reads, »God went for the jugular when he sent his own son.... In his son, Jesus, he personally took on the human condition, entered the disordered mess of struggling humanity in order to set it right once and for all.» Peterson offers no pretense of elevated language or intellectualism, only the insistence that God is relevant in 20th-century work-week and weekend lives.

This kind of translation is not a new enterprise, however. Tyndale--the man singularly responsible for our English translations of the Bible--is purported to have said in a dispute with opposing clergy, »If God spare my life, ere many years I will cause a boy that driveth the plow to know more of the Scriptures than thou dost.» We're simply glad someone of our own generation chose to do the same. --Benjamin Gebhardt --This text refers to an out of print or unavailable edition of this title. [Språk: Engelska] Pocket